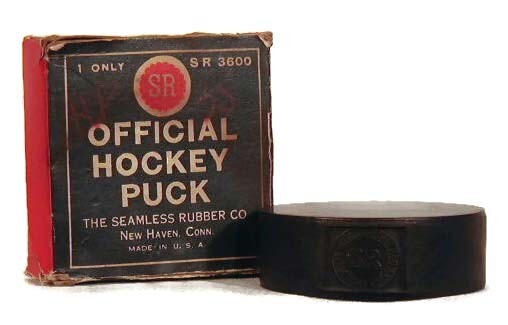 This is a 1910’s Hockey Puck MINT in the Original Box that was made by the Seamless Rubber Company out of New Haven, CT. This is a very rare, vintage hockey puck that comes in the original box that has housed it for the last century. The antique puck has never been used and remains in MINT condition. It has embossed markings that read "OFFICIAL" on one side and feature the company logo on the other... the markings remain unscathed. The original box adds the final touch and grades VG-EX. A scarce opportunity to add a real rarity to your vintage hockey collection!