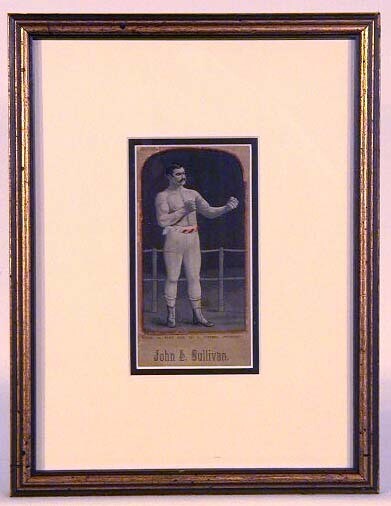 John Lawrence Sullivan, often called the "Boston Strong Boy," was an extraordinarily popular figure in the late nineteenth century and a genuine boxing immortal. He was the link between bare knuckles and glove fighting, and the first great American sports idol. In an age when professional bare-knuckled bouts often dragged on for 50-plus rounds, few of John L Sullivan's fights lasted more than a couple. From 1877 to the turn of the century, Sullivan literally knocked out hundreds of capable men and was the undisputed Champion of the World. He was a broad-chested bull - powerful and quick, destroying opponents with either hand, and taking punishment like no other. Many experts still consider him the best heavyweight ever. The Portrait offered here pictures Sullivan at the height of his popularity if not the height of his prowess - still, it would take a very brave man to enter the ring against this heavily muscled pugilist. Additionally, Sullivan is known as the first heavyweight champion of gloved boxing and is generally recognized as the last heavyweight champion, under London Prize Ring rules, of bare knuckle boxing.

This very scarce, vintage boxing collectible was professionally matted and framed, the frame measures 9"x 11". The overall condition is EX-MT to NR-MT!