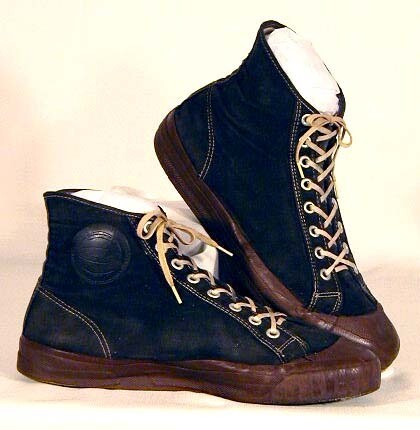 basketballequipment015
$0
Out of stock
1
Product Details

Here we have an EXTREMELY RARE and incredible pair of vintage basketball shoes! Certainly among the finest pairs that we have ever owned, they remain in stunning condition and are endorsed by Joe Lapchic, having his facsimile signature on the ankle patches and bottoms of both shoes! Lapchick played professional basketball and is best known for playing with the Original Celtics in the 1920s and 1930s. He was arguably the best center of his era. He ended his playing career in 1937 to become the head coach at St. John's University. Then in 1947 he took over the New York Knicks in the NBA where he coached until 1957. He took the Celtics to three consecutive NBA Finals in 1951, 1952 and 1953. The connection to Lapchick is great but the shoes themselves are the real stunner! Most impressive is the overall condition and that the rubber remains pliable, almost like new. They are a size 8 and ready for the hardwood!